Sundari Nanda I.P.S,  gave a motivational talk to the campers. She advised the campers to have full faith in God, and be brave and face challenges. Through anecdotes from her life, she taught them not to turn a deaf ear and be blind when public issues need to be tackled. She explained that one can reach his/her goals in life if he/she has determination and passion. Listening to intuition is important. 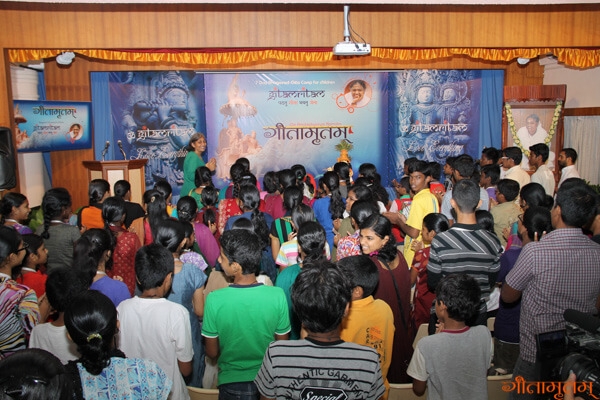 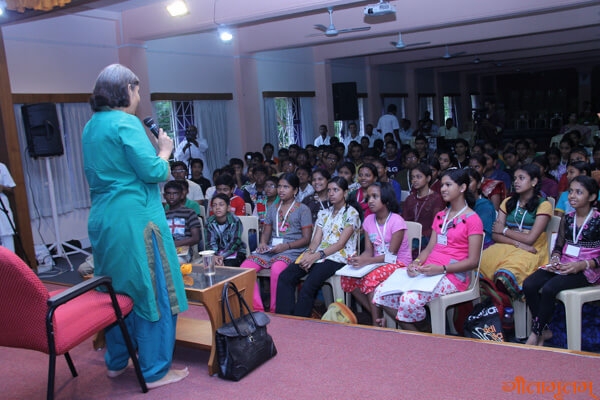 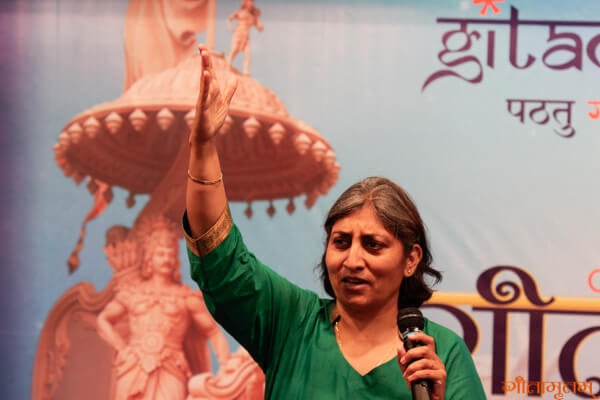 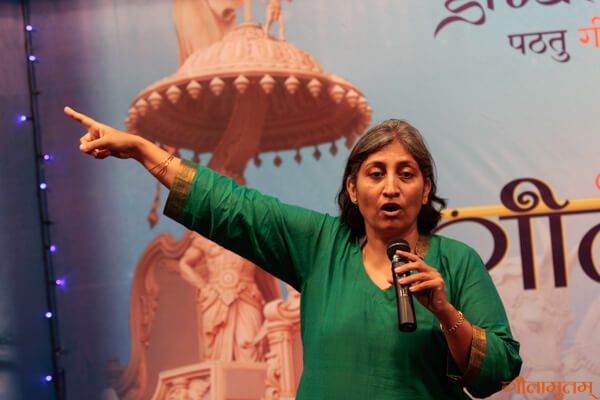 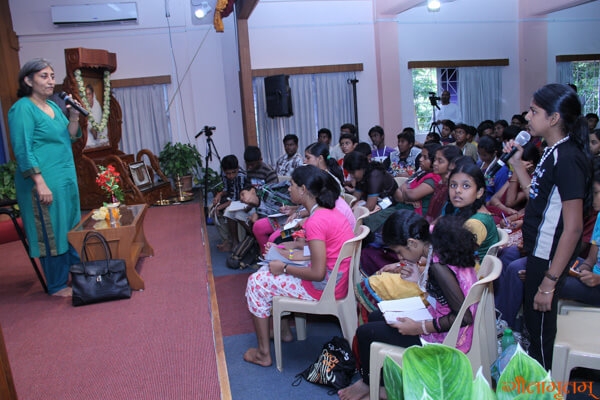 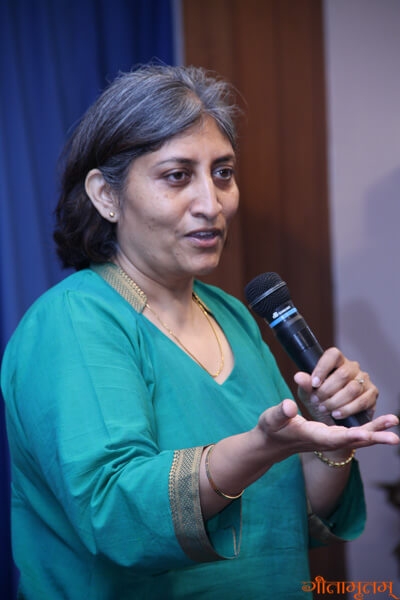 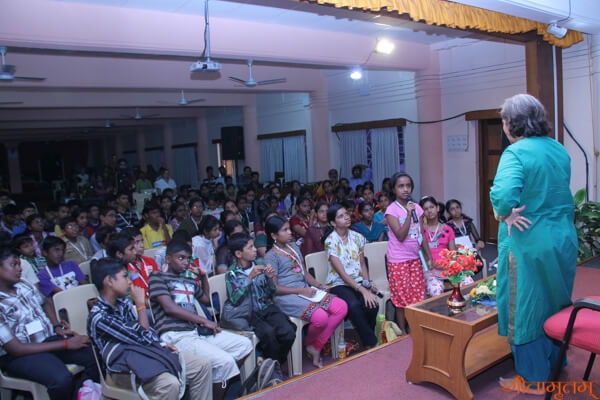 A police for the people. – A.T Amirtha devi

She inspired me a lot because she is brave, courage and was taking right decision. – Inesh Abisha S

She is the best police officer and she gave many advices. It is very useful to us. – J.Selva Tamil Udayan

She is a role model of all. – M.Chithambaresh

She is a police officer who is honest. – S. Deepak Kumar

She is a brave woman who wants to maintain law. – R. Kowsanth Kalidas

One of the best sessions of the camp. She is an example for today’s youth. Her courage and endurance greatly inspired me. – Chitkala S

A very inspiring session. I want to be like her. – Varija V

The IPS officer taught how to believe in ourselves. – Amrutha Ramakrishna

Her life and her words inspired me a lot. – Divya.R

A born lady, who can make impossible possible. – A.Sivaramakrishnan

She followed what the mind told her and this inspired me. I liked the message and awareness she gave me. – S.Prem Santhosh

Her speech was amazing. She has always had faith and that helped her throughout her life. She believed in her faith. – Rishika Rajkumar

I say she was born to lead. – P. Anandh Krishna

She was a very bold personality. – Hrishikesh. G. Menon

This aunty was really an inspirational figure for the girls because she made them believe anything is possible, even being a lady IPS officer. – Madhav Govind

I have not ever seen such a courageous lady in my life. And I will be surely courageous like her. – K Gayathri

I will fix a goal like her and lead a happy life. – S. Atchaya

To succeed in her life she challenged herself and she had full confidence and faith in herself. – G. Preethi

A very brave woman and she inspired me to be very courageous. – S.T.Aadithya Narayanan

She is a very brave and courageous woman and I got inspired by her very much. – Anoosha M. Bhadauria

She was an amazing woman. I really liked the way she spoke to us. Her talk was really inspiring and I love her answer as to why she is happy. – Vaishnavi G

She doesn’t look like an IPS. It made me to join in police department. Her speech made me so upset. – P.Palani Pushpam

Her hard work and bravery are 2 important values which inspired me a lot. – Greeshma P

She was a good IPS officer. When we see unrighteousness we should never support that. – Athmika Prajesh

She was very bold to face anything. – Namitha J. Shenoy

She was a brave IPS officer who encountered many incidents in her life and is happy because she wants to be happy. – Shantanu Sriranjan.B

She taught us how faith can help us. – Akash P Rajan

She is a role model for every one. – P. Mukundh Krishna

It helps to be more brave, we can tackle problems as we are informed about it earlier. She serves as an inspiration for me. – Rahul.C.M

She told us about the many challenges that she faced when she was an I.P.S. She worked very hard to save a child of an 8 year old. – Amrita S

I think we were very lucky to interact with her. It was a great experience. – Ramakrishnan P S

Her speech made me to say that “She is one of the most brave and talented person in the world.”. She teaches us to solve problems and she helps us to control fear. – P.Surat Kumar

I like brave women. She is an I.P.S officer and she told her views about how the world has been changed. I loved her speech very much. – R.Saranya

Cooperative and awesome IPS. She created an awareness about what was the present situation in the world and country. – M. KOUSALYA

A brave lady. She also told about a lot of problems in the society nowadays and made us have a good awareness about all those. – K.Jayapreethi

She is a very brave police officer, who stands for justice. – J.S Nandhitha Sree

Her bravery and attitude proved her to be an IPS. We also got to know some safety measures in her session. – K.Adhithy

It was good to have an IPS amongst the crowd. She did give us awareness about the society. – Mrinalini Ashok

I wanted to be an IPS and she has given me so many examples and that shows that being an IPS is something really big and risky. – K.S.Amrita

She was an IPS officer. She told us how to face the problems in the society especially for girls. It gave us the alertness. – M.Rithikaa

Sundari nanda is an I.P.S officer. She has faith in herself. Because of her faith she escaped from many problems. – M.S.Yazhini

Sundari Nanda mam is indeed a great inspiration for today’s girls. Her braveness, confidence and her supreme faith in God inspired me very much. And her quality to balance both sorrow and happiness inspires the most. – G. Sathiyapriya

As an I.P.S officer she discussed about her life and the challenges she faced. – S.Abitha Shree

I liked her courage very much and i learned few things in that session. I liked her interaction with students. – Sangeetha.M.T

My ambition is to become an IPS or IAS officer. She taught me how to work sincerely. – K.R. Dhanush

She was a woman who did not tolerate any injustice done when she was there. – B. Pavitra

She inspired me because she had faith in God. – S.Sabarinath

An inspiring police officer and a woman who speaks everything frankly. If all the police officers were like her there would be no problems in our country. – K.S.Megha

She has got many awards in her life and I think many awards are waiting for her. She is a sincere worker. Her patriotic feeling for this country is known in her speech, I salute her as a citizen. – S.Aishwarya

The IPS who gave us confidence how to handle the problems, which come to us. – Yamini Vijayakumar

She is an IPS officer who had very much faith in her, which saved her life many times. – Chaaran.A

We were first amazed to see a policewoman who was going to lecture us. And we came to know about things which the society thought as bad and did not create awareness among the young, thinking they will be spoiled. But getting spoiled without the knowledge is more dangerous. If they had the knowledge, at least in future they might change. – Srinath. S

As a woman she is serving our country. I was inspired by her. – Hari Chandhana Varma