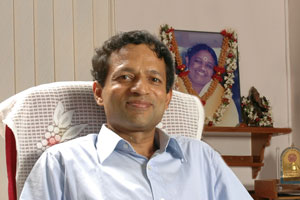 Dr. Rangan founded and directed the Multimedia Laboratory and Wireless Networks Research at the University of California, San Diego, where he served as a Professor of Computer Science and Engineering. He is an internationally recognized pioneer of research in Multimedia Systems and Internet E Commerce. Several startup companies have emerged from Dr. Rangan’s Multimedia Lab pioneers in Internet video streaming.

In 1996, Dr. Rangan became one of the youngest faculty members to be awarded the full Professor position at the University of California.

In 1999, Dr. Rangan worked two and a half year in Yodlee.com and raised $40MM. Continued to serve as Founder and Chairman of the Board of Yodlee till August 2002. Yodlee is now a multinational company with a 98% market share in online account aggregation with over 100 customers that include almost all of the top 10 portals and top 50 financial institutions of the world.

He also holds
the Fellow of ACM (1998), youngest to achieve this international distinction
NSF National Young Investigator Award (1993),
The NCR Research Innovation Award (1991),
The President of India Gold Medal (1984).
In July 2000, Internet World featured Dr. Rangan on its cover page and named him as one of the top 25 Stars of Internet Technologies.
In August 2012, Silicon India ranked Dr. Rangan as one of the “50 Indians Who Redefined Entrepreneurship in the Last 65 Years of Independence”.
Dr. Rangan has over 85 publications in International (mainly IEEE and ACM) Journals and Conferences,
holds 22 US Patents.
Since 2003, AMMA appointed Dr. P. Venkat Rangan as the Vice Chancellor of Amrita Vishwa Vidyapeetham.

Gitamritam speaker in the year 2012.