Pravin Patkar, Founder-Director of Prerana gave a session on “Tribal Bondage”. He awakened the children’s minds to the issues of Tribal Bondage, specifically how the Karakari Tribals are purchased to do seasonal work in charcoal making and in agriculture, and how he walked over 400 km and ventured to rescue the bonded tribal children.

He also enlightened about the commercial sexual harassment in the Red Light area, and how many children are exploited for sexual purposes and organized begging. He also spoke about how he and his wife worked to rescue and guarantee such children a better life. They started the World’s First ‘Night creche’. He told the children to be thankful to God for keeping them safe, and urged them to take a decision that you make ‘everybody safe’. The children were given information about the facility – Child Helpline-1098, and asked them to be alert always to protect themselves. 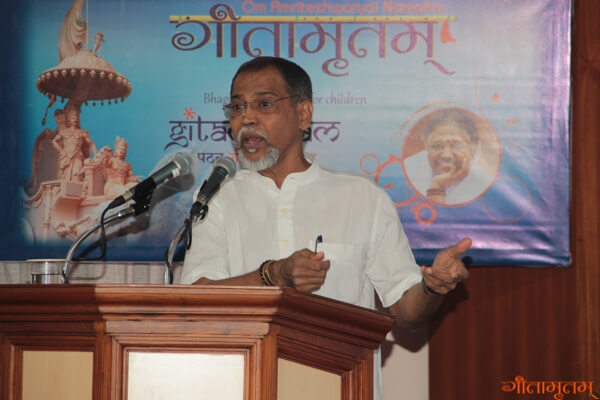 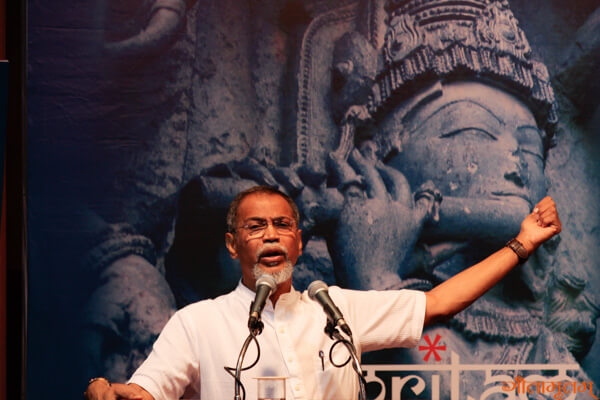 I have to say he is my number one inspiration in this world, who saved the life of so many different children from problems like prostitution and drug abuse. – Madhav Govind

I was really sad to know how my brothers and sisters were suffering. I will try my best to help them. – Jayasudha

I surely will put my level best in saving such abused people in society. – S Atchaya

He is also an inspiration to me. – Jeeva.s

His speech made me very aware of the problem faced by children. – P. Neela Sowndaravalli

He is a hero to us. He saved more than a thousand young girls from trafficking -S.T.Aadithya Narayanan

I think he is the real hero. – M. Subash

Even if he is facing a lot of problems, he is saving the girls. He is a great man. We can see that the girls are affecting only in our country. We have to stop this and have to save the girls. – K.S.Akshaya

He is taking so much effort to save the children, I appreciate him. – Kharthick Rham M

I learnt about what is happening in the world. – M.Chithambaresh

He devoted his whole life to save children and women. He has done a great job. – R. Kowsanth kalidas

I love the way he perceives life! He surely has imbibed a lot of Gita in his life. I could see how he is a living example for the Gita. – Chitkala S

His fight against trafficking is a great job .it is an inspiration to me. – Divyadayanand

My most awaited session of Gitamritam camp, an inspiring session. – Varija V

A model couple for society. They are doing such a good work, risking their lives. Their work is selfless. Thanks to the whole family who saved many lives. – Amrita.J.M

All the social service he did is just so great. No one else could save 9000 children. – Amrutha Ramakrishna

I was able to know the problems the children of my age faced. – Divya.R

I am proud that he is an Indian. – A.Sivaramakrishnan

He informed a lot about the other side of India and gave me the awareness of what happens in the world. – S.Prem Santhosh

He is an amazing person. He and his wife took care of so many children and helped them to lead a happy life. They got threats but they continued and still continue to help these children as they can’t tolerate the injustice done to these children. – Rishika Rajkumar

It made me flow into tears. – P. Anandh Krishna

I felt he is very simple and humble. The work which he was doing is really great. – Anoosha M. Bhadauria

I was and still, am really inspired by the way he has decided to spend his life. His dedication to helping the people affected by child trafficking is remarkable. – Vaishnavi G

He is the role model for me. He inspired me a lot through his speech. – P.Palani Pushpam

He taught me that service to humankind brings us happiness. – Greeshma P

He created an awareness among us. And we got to know more about social issues. -Athmika Prajesh

He taught us how to face life’s difficulties. – Akash P Rajan

Taught us to help others. – P. Mukundh Krishna

It helped me to understand the present situation. It helped me to be aware of the problems which matter the youth. It made me take a resolution that I would spend at least a few hours for my nation. – Rahul. C. M

He told us a very shocking experience and he reminded us to be alert. – Ramakrishnan p s

He is one of the most important helpers and he saved many children’s lives. He inspired us and through his help, we will also help the children!! – P.Surat Kumar

These days the amount of injustice and abuse did to the girls spreads like wildfire. It was really brave of Mr. Praveen Patkar to take initiative to protect the girls after passing all the hurdles that came through, and by forming organizations. – Mrinalini Ashok

I learned how to help the people. – B. Bhuvanesh

His compassion towards these children was wonderful. – M.Rithikaa

Mr. Praveen Patkar was the person who inspired a lot. His life full of struggles to stop trafficking and prostitution and also his guts inspired me the most. – G. Sathiyapriya

I have seen so many children treated badly and would wonder if there was no one to help them. I thought I would help them but I did not get a chance to help. I was very happy when I saw that atleast one person had the thought to help them. – B. Pavitra

He inspired me because he came against the child labour. He had drudanichaya. – S.Sabarinath

We people usually feel delicate to talk about sex, trafficking etc, but Patkarji explained to us about this, and I will also start serving girls from now on. – K.S.Megha

He was a great man. He is helping the children to grow well and abolish red light trafficking. He has done a great job for his country. Some of the points in his talk made me think that our country is going in the wrong way – Are women themselves ready to do this and do police officers support this act? I felt proud that a single family in this whole of India is helping to develop the condition of our country even after getting critically weak physically.  – S.Aishwarya

Hats off to Mr. Praveen Patkar who help the girls and boys from danger. – Yamini Vijayakumar

In spite of threats to his life, he continued his social work which is to be saluted. – Chaaran. A

He has given us a lesson saying that while you live for others you attain a satisfaction. I would like to follow in his footsteps. – Bharath Biju

He enlightened us about the real society and the real-life situations which we miss. He made us aware of the real situation of our country. Thanks – Srinath. S

He is a courageous person. It was thrilling to hear about his life. – N.M.Tharani Taran